The focus this week is on mental health.
Have you ever wondered if you are depressed? Major depression is one of the most common mental health disorders in the United States.  It’s estimated that approx. 17.3  million adults in the United States will experience a depressive episode in their lifetime. That is approximately 7.3% of the US adult population.  Because depression is so common, in this post I’ll share the criteria for major depression as well as look at some other secondary causes of depression  that you might not have considered.

A major depressive episode is diagnosed when a person experiences five or more of the following symptoms nearly every day over a two-week period:
Emotional Symptoms:
*Depressed mood most of the day, nearly daily
*Diminished interest or pleasure
Feelings of worthlessness
Cognitive Symptoms:
Thoughts about death, or suicidal thoughts or behaviors
Neurovegetative symptoms:
Significant weight loss (5% of body weight in one month)
Insomnia (difficulty sleeping) or hypersomnia (sleeping too much)
Psychomotor agitation (movements that serve no purpose such as pacing)  or psychomotor retardation (visible slowing of physical and emotional actions, including speech)
Fatigue
Difficulty concentrating
One of the five symptoms must include one of the two symptoms marked with a star (*).

There are many other depressive disorders as well, including persistent depressive disorder (> 2 years of depressed symptoms), premenstrual dysphoric disorder (depression that occurs in the week prior to the onset of menses), and disruptive mood dysregulation disorder (diagnosed in children ages 6-18 and marked by severe recurrent temper tantrums). There is also a type of depression that is part of bipolar disorder. Each type of depression has its own criteria as well as effective treatments.

The second category is depression caused by  substance use. Alcohol use can cause depression, as can opioids, sedatives, cocaine, and amphetamines. My board review book also lists benzodiazepines and sleeping pills as well.

The third category of secondary causes includes commonly prescribed medications that can cause depression. This list is very long, but common offenders include steroids, ACE inhibitors, beta blockers, and interferon. The antibiotics ciprofloxacin and metronidazole are also on the list, as are baclofen and estrogen.

Because the types and causes of depression are so varied, it is absolutely critical that you see a physician if you are experiencing the symptoms of depression listed above. Your primary care provider is a good starting place. You should have a full physical exam, lab work, honest discussion about substance use and review all of your current medications. There may well be a secondary cause for your depression which can be addressed. And if it is major depression, there are many treatment options available.

No one needs to suffer alone and hopeless in the darkness. There is help readily available.

I hate the phrase "Okay, boomer" but it's not why you think... 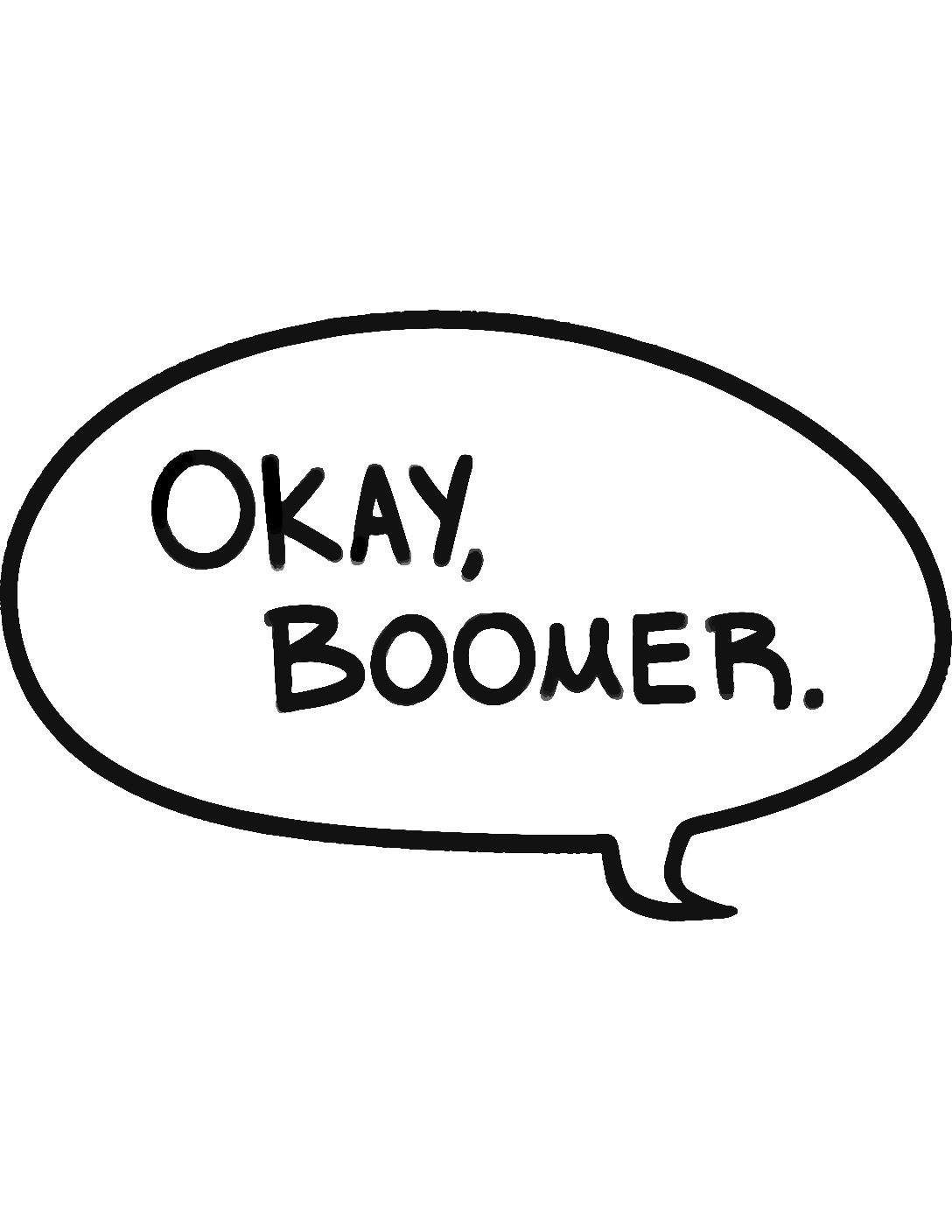 Before you discount this post, my millennial daughter cautiously gave me the go ahead…

I started med school at the age of 50. For the past seven years, nearly all of my friends and close colleagues have been millennials. That small, wonderful first group of us working together and supporting each other through anatomy, the random partners on overnight call when we’d stay up all night long and talk about really important stuff, and the comradery built in study groups while trying to make it through all of those grueling, ego-crushing Step exams. Through all of it, I grew to know and love my millennial colleagues. And even more importantly, I learned from them.

In millennials I saw what I would call a radical acceptance. It is a worldview that stresses empathy and inclusion. It is a way of approaching others that does NOT put people in categories or make generalizations. Instead it means not just accepting others and the many ways they may differ from us, but celebrating that difference.  Race, ethnicity, gender, education, nationality, sexual orientation, income, religion, weight and more. It’s seeing and celebrating the person for the unique being that they are instead of putting them in a category and making assumptions about them.  It is a refreshing world view. (I would add that from a Christian perspective this would be a way to approach others based on Jesus’ teaching of loving one’s neighbor. It makes me wonder what the church may be doing wrong to have turned so many millennials away from religion when in theory they share a similar worldview, but that’s a post for another day).

So why do I hate the phrase “Okay, boomer”? Because it goes against the radical acceptance that defines millennials. It places people of my age and older in a box, and makes pejorative assumptions about us. It makes me wonder if age might be the one category left that millennials may feel it is okay to make negative judgments about others with out knowing them.

I do think that some of boomer age discount millennials and all that they can offer. And I too hear statements from my cohort that I find deeply offensive. And these views must be challenged, especially when they limit the rights of others.

But instead of “Okay, boomer”, a better (more congruent) approach might be to identify the offensive behavior or characteristic and name that regardless of age. Not to lump all us 50+ year olds together and write us off as hopeless because of the number of years we’ve been on this planet. Because doing so goes against the greatest gift that the millennial generation has to offer—radical acceptance. And that includes age as well.

We are a country and world in dire need of the millenials transformative message. This week's focus is on mental health.

I've recently started using genetic tests as part of the management of patients coming in for depression. One of the genetic tests included in the standard panel identifies a defect in the MTHFR gene. This gene is involved in the metabolism of L-methylfolate.

The MTHFR gene is involved in the conversion of the folic acid that we get from our diet or vitamins to the L-Methylfolate form that is the only form that can cross the blood brain barrier. What this means is that you can eat a lot of foods containing folic acid, take vitamins that include folic acid, and have regular levels of folic acid in your blood, but if you have this mutation you cannot convert it to the form that the brain can use. And if your brain is deficient in L-methylfolate, you may not have the building blocks necessary to make enough of these important mood regulating neurotransmitters. Furthermore, if you don't have the ingredients to make them, you can try antidepressant after antidepressant but still get a less than optimal response. Kind of like throwing more and more flour into a bowel in the hopes of  making bread but never adding  enough yeast. You can't get a loaf of bread without all the right ingredients.

MTHFR gene mutations are very common, reportedly as high as 50% in some ethnicities. The genetic testing company that I use reports that people with one mutation (ie heterozygous individuals) have about a 30% reduction in L-methylfolate, whereas people who are homozygous for the mutation have about a 70% reduction.

What I've noticed in people who carry the mutation is that they will often respond well for a short period of time after starting an antidepressant, but then their symptoms return. It is thought that this response is because they do have some of the "ingredients" to make what they need, so when an antidepressant is first started they do well for a bit, but they quickly use up the ingredients they have  and become depressed again. And adding on more antidepressants simply won't work.

For people who carry the mutation who are experiencing depression, L-methylfolate supplementation can be very helpful. (To view a study that supports this statement click here.) L-methylfolate is available over the counter (a lot of my patients buy it on Amazon) and by prescription (called Deplin). But remember, it is L-methyl folate, not just folic acid. Studies show the best response is at a dose of 15mg every day. Side effects are minimal, with gastrointestinal complaints being the most common (occurring in approx 10% of people).

Do you need the genetic test before considering supplementation? No. If  your depression has been resistant to treatment, you might give L-methylfolate a try with out any testing. However, always check with your physician before starting any medication (even natural ones).
Posted by Rev Doc at 3:53 PM 1 comment:

This week's focus is on physical (and mental) health.

The holidays have come and gone. Parties, celebrations, work events, time with family and friends, vacations and more. And for many people, this five-week period from Thanksgiving through New Year's likely included overindulgence. Overdoing alcohol, sugar, calories, spending and more.

Dry January is a way to hit the reset button on one of these areas--alcohol consumption. It is a conscious decision to not drink booze during the month of January.

This practice recently started in Britain as part of a public health campaign. A 2018 poll in the UK showed as many as 1 in 10 people had planned to stay dry for the month of January 2019. Researchers at the University of Sussex then tracked participants. They found that abstaining from alcohol for a month can have many benefits, including:


People who abstained for 30 days also reported that they thought more about why they drink, and felt they had more control over their drinking.

Additionally, the study also showed that giving up alcohol for 30 days had long term effects as well. People who abstained in January and then resumed were found to have decreased the frequency and amount they drank, as well as how often they drank until drunk seven months after completing their one-month period of abstinence. (For more information on the study click here.)

Sound good? Remember from last week's post it is easier to give something up if you replace it with something else (the plus minus trick). It's also easier to do if you make the commitment with a friend so that the two of you can find something else to do instead of going to a bar or sharing a bottle of wine. There is also a free ap available for both Apple and Android that can help (to download the ap click here.) For more tools and tips, visit the Alcohol Change UK website.

Toasting you and your health with a cup of mint tea with honey. Cheers!