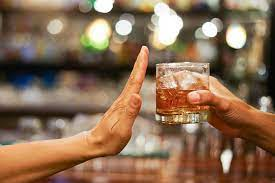 A recent article in the Journal of Addiction Medicine reported on changes in alcohol consumption in response to the COVID-19 pandemic in the United States. The researchers found that during the pandemic there has been a 29% increase in the number of alcoholic drinks that people are consuming, a 20% increase in those exceeding the recommended drinking limits, and a 21% increase in binge drinking. Among the researchers conclusions is that there is an association among the COVID-19 pandemic and the amount of alcohol consumption and that public health monitoring is warranted.[i]

If you have found yourself drinking more during the pandemic, you are not alone. Here are ten questions to ask yourself to help you determine if your drinking may have become harmful:

3.      How often do you have 6 or more drinks on one occasion? Never/Less than monthly/Monthly/Weekly/Daily or almost daily

4.      How often during the last year have you found that you were not able to stop drinking once you had started? Never/Less than monthly/Monthly/Weekly/Daily or almost daily

5.      How often during the last year have you failed to do what was normally expected from you because of drinking? Never/Less than monthly/Monthly/Weekly/Daily or almost daily

6.      How often during the last year have you needed a first drink in the morning to get yourself going after a heavy drinking session? Never/Less than monthly/Monthly/Weekly/Daily or almost daily

7.      How often during the last year have you had a feeling of guilt or remorse after drinking? Never/Less than monthly/Monthly/Weekly/Daily or almost daily

8.      How often during the last year have you been unable to remember what happened the night before because you had been drinking? Never/Less than monthly/Monthly/Weekly/Daily or almost daily

9.     Have you or someone else been injured as a result of your drinking? Never/Yes, but not in the last year/Yes during the last year

10   Has a relative, or friend, or a doctor or other health worker been concerned about your drinking or suggested you cut down? ? Never/Yes, but not in the last year/Yes during the last year

Maximum possible score=40. A score of 8 or more indicates a likelihood of harmful drinking behavior and warrants more careful assessment.

If you scored above 8, or even if you didn’t but  feel that you sometimes drink too much alcohol, or that your drinking is causing problems, or your family is concerned about your drinking, talk to your clergy person or your doctor. They can help you determine if you need to cut back or quit altogether, and steer you in the right direction.

·        Dry January (tools and information about taking a one month break from drinking--it can be any month, not just January): CLICK HERE

·        Consider reading: Quit Like a woman: The Radical Choice to Not Drink in a Culture Obsessed with Alcohol by Holly Whitaker

We close with the full version of the Serenity Prayer attributed to Reinhold Niebuhr (a shortened version is used in many 12-step programs):

God grant me the serenity

To accept the things I cannot change;

Courage to change the things I can;

And wisdom to know the difference.

Living one day at a time;

Enjoying one moment at a time;

Accepting hardships as the pathway to peace;

Taking, as He did, this sinful world

Trusting that He will make things right

If I surrender to His Will;

So that I may be reasonably happy in this life

And supremely happy with Him

Forever and ever in the next.

This article was originally written for the Episcopal Diocese of San Diego.